"Oh, I can see you're utterly starstruck! Don't fret, darling. I always have time for my fans!"

Wiggle Wigglebottom is a Grumpus who is a resident of Snaxburg, and part of Elizabert Megafig's expedition.

An extravagant entertainer. Her star has faded.

Wiggle is a celebrity, singing sensation, and a diva, dressing in a flashy manner. She can be somewhat proud, assuming everyone is already a fan of hers, but appreciates her fans nonetheless. Wiggle acts very dramatically, and commonly sings her words even in normal conversation. While she revels in her stardom, it also haunts her: she is a "one-hit Wiggle", known only for one song, Do the Wiggle. This song was entirely improvised, and Wiggle wishes her more original work could get such attention. Suffering from writer's block, she turns to Bugsnax for inspiration.

Wiggle and Gramble have a somewhat strange romantic relationship. While they do genuinely care about each other, Wiggle is not entirely above eating some of Gramble's Bugsnax.

Wiggle is a tall, orange Grumpus with a round, protruding green nose and blue eyes.
Her face shape is an overbite, the front row with two large asymmetrical round front teeth and two round teeth on the side, the below row four round teeth with the outer ones being longer.
Her defining accessories[1] are both her hot pink star-shaped glasses as her hot pink boa.

When first encountered Wiggle is already snakified, sporting a Cheepoof "mohawk" - allowing the top of her head to be changed for her first quest Pen Pineapple! without having to snakify her limbs first.

Wiggle is seen walking around with her banjo most of the time and she never stops wiggling. 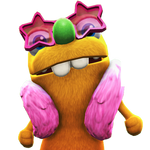 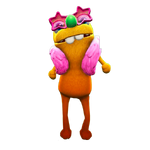 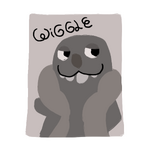 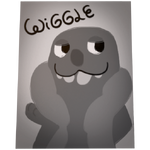 Get Wiggle Back to Snaxburg!