Wambus Troubleham is a Grumpus who is a resident of Snaxburg, and part of Elizabert Megafig's expedition. He is often seen on his farm. Players meet him the first time together with Filbo in his makeshift farm in Garden Grove, where he is troubled by Bungers and bad soil. He is the husband of Triffany Lottablog.

Wambus is a hard-working farmer, stern, violence-prone, stubborn and short-off. He grows what little Snaktooth Island has to offer as a foodsource; Sauce, and attempts to figure out how to grow Bugsnax as he figured that the plant-based types have plant-based origins.

During the Fight when it became clear to Snaxburg that Lizbert and Eggabell had gone missing, there was panic due to a shortage of food - the latter that Lizbert supposedly provided with her Bugsnax ventures. The expedition team turned to Gramble and his barn full of Snaxs but as he considers the creatures his kin he would not allow them to get eaten. Wambus not respecting that viewpoint and pushing his own, especially in times of crisis, went and put some of them in a sack and stole them. Gramble witnessed this - "I should've known. Wambus never quits" - and went to let the rest of them go to save them from being eaten. Before or after this escalation, Triffany describes Wambus was furious with Gramble and at his throat. This made Triffany decide to continue her research on her own and to not return to Snaxburg for a while. In the lack of communication between both the married couple as the whole of the expedition team, the assumption was that "his wife left him".

In his desperate loneliness, Wambus has taken in a cactus that resembles Triffany in shape and colour and dressed it up as her and refers to her as both "Cactus" as "Cactriffy". From Beffica's observation he talks to it between 10 PM to 1 AM. While he ponders towards Cactriffy that his loneliness is making him act 'peculiar' and the cactus being optionally a reason offered by the Journalist for Triffany to go back to Snaxburg to check up on him, the Cactus remains residing in their shared home and even across the town.

When meeting, Wambus does not make eye contact with the Journalist, seemingly uninterested in their introduction by Filbo, the latter he assumed to have died (pretending to not care if so) and focuses on his own misery. He aggressively declines Filbo's request to come back to town and hurls his Ketchup towards Filbo, who is tackled by an ethusiastic Bunger. Wambus, shocked, proceeds to run to the Journalist, politely tipping his hat in greeting and requests help in both catching the Bunger and checking up on Filbo. Filbo conveniently crashed into a tree which, after recovery, he tries to push over to create a make-shift bridge. He requests help but Wambus is too busy speaking with the journalist.

As per Major Celebration, Wambus has been contemplating his behaviour towards Gramble and his little ones and is ashamed of it. What led up to this conclusion and what aspect of his ways he questions is not further elaborated on. Gramble as usual quick to forgive proposes a hug which Wambus turns down. However a dance won't hurt.

Wambus and Triffany sold their old house before coming to Snaktooth Island, he mentions this during the ending.

Wambus is a tall muscular build dark-blue-furred Grumpus with a wide, green nose and green eyes.
His face shape is an underbite, the front row with sharp teeth sticking out from his jaw and one smaller one in the middle, the upper two sharp long front tooth with a gap between them and another set of fangs that hide behind his front row teeth.
He wears a wide-brimmed straw hat that he tends to tip in his body language, and keeps a piece of straw in his mouth. His defining accessory[1] is a green flannel vest.

Wambus is in his late 40s, "pushing 50" as he puts it. The only other character with an age mention is Shelda who is nearing 70. 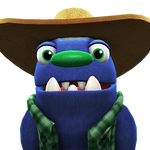 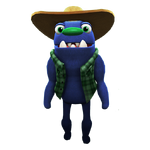 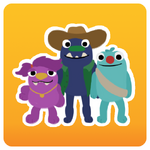 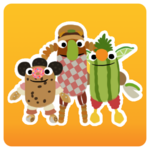 Filbo Brings The House Down