The Isle of BIGsnax is a free DLC expansion released on April 28, 2022. It introduces a new biome, new Bugsnax, additional lore though quests and several loose gimmicks and challenges.

The Isle of BIGsnax is an expansion that can be accessed during the story of Bugsnax. The Journalist, joined by Triffany, Chandlo, Floofty, and Shelda go on an expedition to an island off the coast of Snaktooth, after it emerges from the ocean.

The new island is home to Bugsnax that have not been seen on Snaktooth Island. Triffany hypothesizes that they are an ancient species, and have been preserved at the bottom of the ocean. These Bugsnax include:

A new item known as Shrink Spice can be used to literally bring these gourmet giants down to size, granted the effects are temporary.

The island holds the secret Triangle Key to open The Triplicate Space, where one elusive Bugsnak rests to be released and roam Snaktooth Island.

Bugsnax are now able to wear various hats, including those worn by various Grumpuses. These hats are seen on wild Bugsnax as well as on ones in Gramble's ranch. The Hat Board can be used to showcase a selection of 5 hats, even if you have 6 or more.

"The Journalist's hut" is now finished, and can be customized with various furniture items and decorations. Its exterior can be customized as well, and a second floor is added upon fulfilling a certain amount of requests. 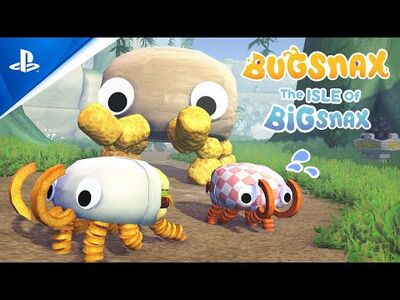