"Move along, interloper! Whatever sort of spy or counteragent you are, I'm not about to fall for your tricks."

Likes the indoors, metallurgy, and charts.

Snorpy is a paranoid conspiracy theorist who believes all the misfortune in his life is due to his being targeted by a shadowy organization called the Grumpinati. He is highly suspicious of unfamiliar individuals and refuses to speak to the Journalist until Chandlo vouches for them. However, once his trust is gained, he is eager to speak about his findings and beliefs. He suspects the Bugsnax are produced underground in some sort of factory, deliberately engineered to be delicious while being used to track and monitor those on the island, and that eating them can neutralize them somehow.

He is fiercely introverted due to his chronic anxiety. When in public, he attempts to disguise his true intentions by speaking loudly about mundane topics, in an effort to fool the Grumpinati agents he believes are constantly watching his every move. He also uses hugs to place tracking devices on people or share secret information.

In a parallel to Chandlo, Snorpy is fixated on the idea that he must keep his friend and partner safe through ignorance, that Chandlo must be kept from knowing what Snorpy perceives as the truth for the sake of his own safety. This causes friction between them, as Chandlo is more perceptive than Snorpy believes him to be. Snorpy also butts heads with his older sibling Floofty, who he accuses of "working for the man."

Snorpy is an engineer and was the one who designed and built most of the tools used by the journalist, as well the buildings of Snaxburg together with Chandlo.

Snorpy is a yellow-furred Grumpus with a purple, pear-shaped nose and purple eyes.
His appearance is in contrast with his Sibling Floofty. Their colours are inverted, where Snorpy has the yellow fur and purple nose and Floofty has the purple fur with a yellow nose. Snorpy has extraordinarily long legs whereas Floofty has extraordinarily long arms.
His face shape is an underbite, with two big round teeth sticking out from the jaw and a row of four round uneven upper teeth that overlap over one another.
He has orange locks covered by a red newsboy/flat cap[1] without sewn lines yet still a button on top.
He sports a complex pair of glasses with multiple adjustable lenses/loupes that rest on the side when not in use. Snorpy wears one of these lenses over the main lens in front of his left eye. The upper frame is of a thick black material to carry the weight and can be read as thick eyebrows. He has a strict routine to clean them as noted by Beffica during Imitation Beef Part 2!.
He wears a green apron with black straps and edging that hold three pockets; his left pocket holds three pencils, his right pocket a screwdriver and a wrench and his middle pocket is seemingly empty.
His defining accessories[2] are both his glasses and his apron.

Upon meeting Snorpy he has already been partially snakified; his right hand affected by a Bopsicle and his leg by Cinnasnails. These snakifications are referential to the tools lend by Snorpy that aid in catching these Bugsnax and shows Snorpy has been testing these tools as well. 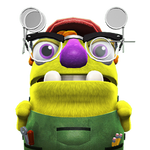 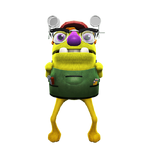