The Snaxsquatch is a cryptid that resides on Snaktooth Island and appears in most of its areas in specific locations at specific times making its encounter one by chance. It does not move from the spot where it spawns, cannot be interacted with and deforms upon being seen - making it harmless to the player.

Managing to scan it with the SnaxScope before it deforms will earn the player the "Candid Cryptid" Trophy.

The Snaxsquatch appears observing the Journalist passively and disassembling a few seconds when looked at in their general direction.

Some Snaxburg residents report seeing a strange presence around the island after Lizbert's disappearance, though each have a different idea of its identity.

Wiggle mentions the Queen of Bugsnax every chance she gets and considers it her muse. After her interview she hands to Journalist a map of where she sighted the Queen. Though it does not 'tower above the trees' or 'eclipse the moon', the Snaxsquatch does appear in the general area she claims to have seen it.

Triffany mentions her sighting of the cryptid on top of the canyon of Scorched Gorge during Snaxburg Gets Spooked. Cromdo, who has set up camp at the same area, right in front of said canyon where the creature can be spotted, has seemingly never seen it as he doubts Beffica's and Gramble's claim in The Intruder!. Upon being convinced by the Journalist findings (even if their claim is "Aliens") he described it as "having a genuine monster at our paws". Triffany responds finding "monster" a prejudicial term and rather refers to it as a 'cryptid' or 'undiscovered animal'. Despite the Journalist being an investigator of cryptids, no connection is made between this and the Snaxsquatch.

When Beffica and Gramble both claim to have seen a monster, the player looks for clues of its presence, and finds evidence such as Grumpus-like footprints that abruptly stop, and the phrase "NO MORE BUGSNAX" carved into the Snaxburg sign. There are many more signs pointing the Snaxsquatch was in Snaxburg.

When the Journalist falls into the Undersnax and meets Lizbert, they learn that the Snaxsquatch was created and controlled by her. While the Bugsnax tried to turn her into more of them, Lizbert, through her willpower, forced them to instead become her, creating these Grumpus-like constructs. Since a Snaxsquatch cannot talk, the most she could do was try to scare the rest of the Grumpuses into leaving the island before it began to collapse, though she was ultimately unsuccessful in scaring them off.

If the player does not follow Filbo and takes a different turn in the The Undersnax it will run towards you. Given the collision and violent sound, it is to be assumed it kills the player. The player is reset back in the location of the turn choice.

The Snaxsquatch can randomly be found in one spot per location often out of reach of the player, between the hours of 7pm and 6am. It spawns upon entering- or waking up in the location, the latter requiring a possibility to sleep. It does not appear in Boiling Bay, Sizzlin' Sands, or Broken Tooth.

The Snaxsquatch is a construct of Bugsnax that resembles the shape of a Grumpus, mimicking their average size and proportions, movements and bipedal stature, making the 'bug' element appear absent.

Unlike other "colonial organism/fusion" Bugsnax, the Snaxsquatch appears less stable and is capable of disassembling itself into its components and returns to to the soil from which it took shape. Beffica assumed it was a Grumpus at first and described she it scattered into Bugsnax. Due to the lack of harmony and constant rebuilding it is likely that the Snaxsquatch theoretically could be made up of any collection and consistency of Bugsnax. 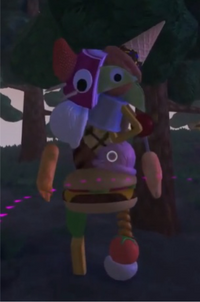 The Snaxsquatch consists of a total of 10 Bugsnax:
The right half of the face is a Tropicabug (red onion) functioning as the right eye with a Strabby horn, the left half a Scoopy (chocolate scoop) with the cone sticking out as the other horn and with a Green Peelbug functioning as the left eye. The eyes differ in size. Right underneath the Scoopy is a Fryder of which the silver zigzag 'packaging' is supposed to allude to sharp teeth (even though Bugsnax do not have teeth). The Fryder's limbs/fries hold the Sweetiefly shoulder in place which ends up in another part of Tropicabug (shrimp) as the arm/hand. The right shoulder is again Scoopy (vanilla scoop) with a Cheepoof arm/hand. The torso midrif consist of Shishkabug (meat), Tropicabug (pineapple) and the Scoopy (strawberry scoop)The torso base/hips are a Bunger, as well as their left upper leg which flows into Shishkabug (tomato, mushroom). The right upper leg is the Green Peelbug and ends up in a Fryder leg. On their back there is a Cinnasnail which seems to resemble a backpack.

Its name is a combination of "Snax" and "Sasquatch". The Snaxsquatch's Candid Cryptid Trophy pose is a reference to "Frame 352 of the PGF" - the most well-known "shot" of the Sasquatch[1]. 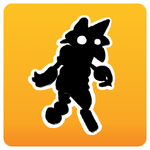 The snaxsquatch in Flavor Falls

The Snaxsquatch in Scorched Gorge