Upon scanning, the subject scanned will have a white outline, and a text balloon pops up with both the name of the subject as descriptive text or ponder thoughts provided by the Journalist.

It has the ability to memorize and recognize previously scanned organisms and objects. Notes added to the scans are commentary of the person handling the SnaxScope.

"It says that because you wrote that in yourself..."

In the Journalist's case, functional information on Snax seem to be notes from research done before them as, gameplay-wise, it functions as hints for Snak catching. Actual commentary provided by the Journalist is found in the Grumpus scanning and points of interest where they think to themself.

By pressing 'more info', Grumpuses give (humorous) commentary which provides character- and expedition research insight on the BugSnax, fellow Grumpuses and the Points of Interest. This information is only available when the Grumpus has been met by the Journalist. This commentary is not documented in the Journal. Instead, the Journal has its own text.

All Bugsnax can be scanned and their base information will be added to the Journal. With the exception of Elizabert, all Grumpuses provide commentary per Bugsnak

Most scannable objects are found within Snaxburg in the Grumpuses' huts that become accessible once they return to camp. A few of these objects have a 'more info' option if the respective Grumpus providing it has been met. For example, Snorpy's forgery has commentary by Eggabell and the Unfinished Hut has commentary from Chandlo. Statues, sauce plants and wall paintings in the outworld are scannable and do not offer further information.

The name is based on its game-function of scanning Bugsnax and would not likely be a term used outside of Snaktooth Island. Beffica is shown to use it mostly to snap pictures and has them printed out to decorate her hut with, alike Lizbert's and Eggabell's hut. One of the photographs in Lizbert's hut is one of the entire expedition team - meaning the Snaxscope can be set up with a timer.

How they are printed is not shown. The Snaxscope could be a polaroid - a camera with printability -

The Journalist' snaxscope would probably be able to snap and save pictures as well but there is no picture save function in the game let alone printability.

The Snaxscope is explictly required for several tasks. 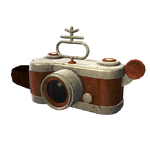 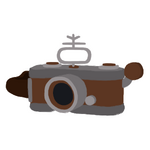