The Snak Trap is a Field Tool for trapping Bugsnax.

The trap can only catch Bugsnax that are not too big, small or fast and they require to be out in the open field for the trap's radius. A trapped Bugsnak can be contained for 10 seconds before it bursts out, regardless if it was trapped in a stunned state or not. A frozen or fiery Bugsnak need to be neutralized before capture or the trap catches on fire or becomes frozen. The trap still functions but cannot directly be interacted with or the Journalist themself is exposed to these elements. It is possible to launch it with the Lunchpad into nearby waters to neutralize it

The Snak Trap is engineered by Snorpy with the goal of efficiently trapping Bugsnax. Lizbert, as the Bugsnax supplier, likely has one in her possession, and Filbo has one as well, but has trouble to put it to use due to his lack of skills. He gives his own Snak Trap to the Journalist, who is able to operate it just fine.

Filbo gives the tutorial of how to use the Snak Trap, showing how to hide and pick up a Strabby.

Gramble notes during his Main Quest that the Bugsnax do not like being in the trap as the Peelbugs refuse to unroll.

The Snak Trap is a cylinder shaped, made off of light woven wood material. It snaps open in 4 claw-like pieces under which a blue-colored net structure is projected to show the radius. Once a catchable Bugsnak enters the radius, a jingle plays and the blue projection becomes green. It immediately snaps close upon the remote's response.

Filbo marked his Snak Trap with blue markings correlating with his own fur color. White paw prints are decorated on the sides and on the top button. 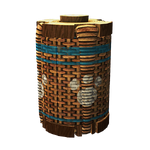 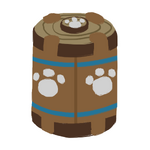 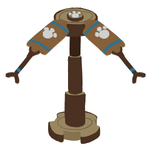 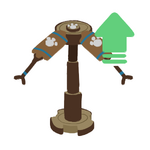