The Sauce Slinger is a tool the player receives from Wambus during the tutorial to help with luring a stray Bunger into a pen.

It is a slingshot used to launch the various Sauces that can be found around Snaktooth Island. Many Bugsnax have a favorite sauce that can be used as bait, while others may dislike certain sauces and react with hostility. Sauces can be splattered onto any dry surface, or directly onto a Bugsnak, Grumpus, or interactive object. The Sauce Slinger has a wide variety of uses. If an aggressive Bugsnak sees its favorite sauce coating another Bugsnak, it will attack it, leaving that Snak vulnerable to capture without the use of any other tools. Alternatively, the sauce-hating nature of a Sodie can be taken advantage of by creating a trail of sauce for the Sodie to follow, luring it to a spicy Snak it can extinguish. The true potential of the Sauce Slinger, however, comes from using it together with other tools:

Despite its speed, it is not able to lock onto anything long enough, which otherwise would allow the aim to be adjusted to the movement, which the Lunchpad can do. 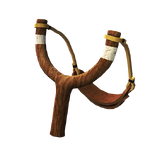 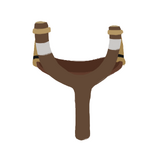