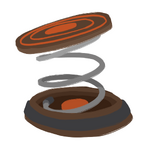 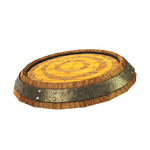 The Lunchpad is a launching platform tool that aids the use of other tools by launching them. Furthermore, it can launch any movable objects, Bugsnax and Grumpuses.

The Lunchpad's helps catching flying Bugsnax by launching the Snak Trap, allowing them to be captured in midair. When deployed, an orange line of trajectory will appear from its base, signaling the arc a launched object will travel. If aimed at a Bugsnak, the Lunchpad will lock on, causing the line of trajectory to turn blue and follow the Bugsnak as it moves.

The Journalist obtains the Lunchpad from Cromdo at Scorched Gorge as part of his Main Quest; Cromdo Cashes In. After a free trial where Cromdo made the Journalist fix his windmills for him, they are swindled into buying the Lunchpad as per Cromdo Mart rule: "you used it, you bought it". Cromdo accepts/requests Cheepoof as payment, a flying Bugsnak that puts the Lunchpad to use.

Sugarpine Woods is filled with Stationary Lunchpads with a fixed trajectory to move faster around the mountain area. They are invented and created by Snorpy as are most other Catching Tools and thusly the Mobile Lunchpad.

The first encounter with a Stationary Lunchpad is its presence Gramble's obstacle course in Simmering Springs, allowing the Buggy Ball to exit the course. Another is present in the ruins of Sizzlin' Sands which allows the Black Razzby to reach the surface. This seems to be made by an ancient Grumpus civilization.

Cromdo's final quest requires feeding him Bopsicles found at Sugarpine Woods. This area opens up after meeting Chandlo who resides with Snorpy at said area.

In Video Diary #4, Lizbert and Eggabell are busy with a Lunchpad similarly to the Journalist's. Cromdo 'salvaged' the two's belongings during the events of The Fight - stated in both Beffica's interview and Cromdo's. Either Cromdo stole the Lunchpad directly from its inventor Snorpy or he sold the Journalist Lizbert's belongings.

The Lunchpad plays a key role in the final part of Cromdo's Side Quest; Cromdo Does Crime where the Journalist defeats and captures the Legendary Bugsnak Mothza Supreme. The lunchpad is to be placed in the altar and launches Bombinos placed on it as explosive projectiles.

Beware, spoilers ahead!
This section contains HEAVY spoilers for Bugsnax. Proceed at your own risk!

During the end of the game, during the invasion of Snaxburg by hostile Bugsnax, Cromdo and Beffica use a seemingly unmodified Lunchpad to launch explosive kegs of Snakwater at hostile Cheepoofs and Sweetieflies.