"I've been trying to breed Bugsnax together. It's been real tricky 'cause they don't got any obvious, um... bits to 'em?"

Gramble Gigglefunny is a Grumpus who is a resident of Snaxburg, and part of Elizabert Megafig's expedition. After the Grumpuses had their great falling out, Gramble set camp in the Simmering Springs area to live with his Bugsnax.

Gramble is interested in Bugsnax as companions rather than food, opting to raise them as pets and try and train them instead. He has successfully trained a Strabby, named Sprout, to follow a laser pointer, and is also interested in breeding Snax, but has not quite figured out how they reproduce.

He struggles with abandonment issues, telling the player that he needed a new family after his old one left. Gramble gets worried easily and tends to jump to conclusions. He also refuses to consciously eat Bugsnax, unable to understand how the other Grumpuses can do so. This causes serious tension between him and Wambus, who calls him a "weepy little rancher".

Gramble also appears to be romantically interested in Wiggle, although he struggles to understand her at times and isn't sure whether she actually likes him back, or just wants his Snax.

Gramble is a short pink-furred Grumpus with a cyan, gumdrop-shaped nose and cyan eyes.
His face shape is a neutral mouth position with a pair of big round front teeth and two smaller round teeth, the below row three round teeth with the middle one sticking out more.
His most iconic feature is his hat, a red beanie modeled after a Strabby but this is not his defining accessory. His defining accessory[1] is his turquoise argyle sweater vest.
He has long arms, perfect for hugging, and when walking he holds them up to his body. 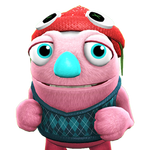 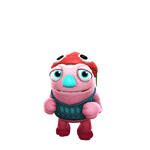 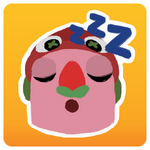 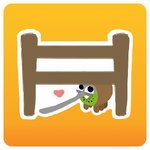 Trophy - In The Arms of the Gramble