"You're okay!... You are okay, right? No drowsiness, numbness, or missing limbs?"

Well-rounded, but often scrambles to keep herself together.

Eggabell serves as the medic in Snaxburg, and is very concerned about the health and well-being of her fellow Grumpuses. Despite her medical experience, she is prone to extreme worry over even the slightest injuries.

She suffers from low self-esteem and depression stemming from her physical weakness and lacks confidence in her capabilities in keeping everyone healthy and safe. She is highly dependent on Elizabert for validation and emotional support but sees herself as a burden to her.

Eggabell often uses egg-related phrases while speaking, as do others when speaking to her.

Eggabell is a white-furred Grumpus with an egg-shaped, egg-colored nose, as well as her body being egg-shaped, and light pink eyes.
Her face shape is a neutral mouth position with a row of four round front teeth, the ones on the sides sticking out more, and a row of three round ones down below.
She wears a white (60s/70s) nurse's cap with one red line and a belt with a first-aid kit attached to it.
When met by The Journalist, she wears Lizbert's ranger hat and an eyepatch on her left eye.
Her defining accessories[1] are her first-aid kit and her eyepatch. 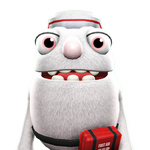 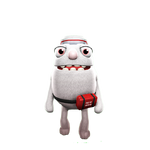 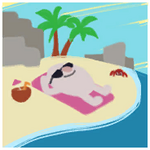 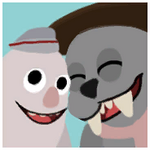 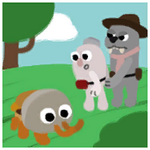