"Friend, have I got a bridge to sell YOU! Bea-utiful, isn't it? Hard wood, new construction, ah? Oh, baby, what a bridge!"

Cromdo is a rude, shifty, backwards salesman with a cynical outlook on life. He expects the worst out of everyone and that is his reasoning to act his worst. He is a con-artist who schemes and tries to steal from anyone making him distrusted and disliked by the rest of the expedition team (especially Beffica).

He can swiftly change his tone the moment it benefits but never so much that this is not clear to those he tries to swindle. When his scheming is brought to light he stutters in defense, revealing he is actually not fit for the stress that comes with it.

Honest living never worked out for him so he sees no reason to change his ways - yet all he desires is having enough money to be rid of worries and open a karaoke bar where he can do what he loves best in life: singing.

Cromdo became part of the expedition team after seeing Elizabert Megafig on TV speaking of her gathering to investigate Snaktooth Island and her "discovery" of Bugsnax. Cromdo describes it as her talking about a 'New Superfood' which seems to be him projecting a marketing viewpoint in her finding.

Alike Filbo, he dropped his current life entirely for this expedition - specifically his 'dead-end job' of 'selling gruel to grandmas on commission' - in the hopes of beginning anew. His plan is to swipe a lot of Bugsnax and become the CEO of a Bugsnax Food Franchise company making him filthy rich as a result and live the life of fame and luxury he longs for.

While open towards The Journalist about his endeavors in his interview, it is unclear if he voiced this towards expedition leader Elizabert or anyone else. He does not involve anyone but himself in his franchise plan.

During the event of The Fight, as it was clear that Elizabert and Eggabell had gone missing, Cromdo took the opportunity to 'salvage' the couple's belongings, considering it his own to claim ownership over, and sell it off to the other Grumpuses. Beffica brought this to light when he tried to sell her the projector. Supposedly she also planted her diary in his hut as 'evidence' backup for her claim that he is a thief. Upon being exposed Cromdo packed up and ran, leaving for the Scorched Gorge. He set up Cromdo Mart at the top of the canyon because the ground-level Spuddy's were too aggressive.
While there is no direct connection made between his motivations and actions, Cromdo's reasoning to 'salvage' had to do with his assumptions of what happened to Lizbert and Eggabell. During the panic that led up to The Fight, he made a run for the expedition team's boat, planning to leave the island; however, the boat was gone, and Cromdo assumed that Liz and Egg left the team to fend for themselves and are now living the high life in New Grump City, essentially what Cromdo's plan was too.

At 5PM when Snaxburg ends its day, Cromdo heads off for the entrance hill toward The Journalist's boat and stares at it. His interview takes place there as well, and he also uses it as a spot to practice his karaoke, surprised by the Journalist's presence at their own ship.

Filbo is cautious in greeting Cromdo as Cromdo is often in a bad mood or otherwise snaps at him.

Wambus and Cromdo shares their scan-info trivia in which Cromdo describes Wambus as a stick in the mud and Wambus how far he can throw Cromdo, describing a common situation where Wambus has had it with whatever Cromdo tries to do and gets comically violent with him.

A similar dynamic plays out at the End Game where Wambus playfully throws a bottle of sauce into Cromdo's face, the latter lamenting their potential starvation but reluctance to consume Wambus's "plant goop".

Regardless of his open display of rudeness, Wambus's aggression is enough for Cromdo to fear him and not want Beffica to snitch.

Cromdo and Beffica share a hatred for each other - though it bases itself around Cromdo's schemes and Beffica revealing those schemes or otherwise being able to get something out of it in the promise of not ratting him out.

No mentions made other than that Cromdo does not believe Gramble's and Beffica's story during The Intruder! - but he aims this sentiment mostly towards Beffica.

Cromdo would hate Wiggle as per Beffica's observation, because she is rich, famous, successful and everything he wants to be. He is ironically a fan of her work as his karaoke practice involves her hit single "Do the Wiggle".

When Snorpy and Wiggle have a short debacle about the identity of the Snaxsquatch, he steps in to tell them to cut the difference and settle on both being wrong.

His only mention of her towards the Journalist is stating Wiggle is a fraud along with Beffica and Shelda. Wiggle herself never mentions Cromdo in any way nor talks to him.

Despite the two having overlap with their love for singing, performing and longing for the lime-light no further connection between them is made.

After Cromdo is brought back to Snaxburg and before the events of Snaxburg Isn't Safe, Triffany states that she tries to get along with everyone but Cromdo is her limit as he would "sell off his grandma if it make him a few bucks".

While Cromdo had already sold the bridge to the Journalist at this point, he still tries to swindle cash out of it by telling Chandlo he needs to pay for the "rights to repair".

Cromdo's given tool, the Lunchpad, is one of Snorpy's inventions he swiped, either to use for himself or to sell.

In the end game when Cromdo survives, he celebrates declaring that Snorpy owes him five bucks.

Cromdo does not want to be part of their experiments because he "likes his organs where they are".

Cromdo describes Shelda as a fraud worse than himself, making him look honest in comparison. He would have "a nose for phoneys".

Cromdo is distrustful of both Elizabert and Eggabell and assume them to have run off together leaving the expedition team to fend for themselves. He speaks of Lizbert giving Eggabell "her fix" with Bugsnax.

Cromdo is distrustful of both Elizabert and Eggabell and assume them to have run off together leaving the expedition team to fend for themselves. He speaks of Lizbert having orchestrated this entire expedition to "stroke her ego" because "everyone thinks she is soooo great" and giving Eggabell "her fix" with Bugsnax.

Cromdo is a short, crimson red-furred Grumpus with a long, protruding thin, dark blue nose and a dark-yellow eyecolor that matches his tie.
His face shape is an underbite, the front row with huge long sharp teeth sticking out from his jaw and one smaller one in the middle, and the upper teeth being a symmetrical row for four.
He has a darker shade of hair sticking out on the sides of his head (which is to be read as semi-bald). His defining accessory[1] is an orange tie with a Bugsnax googly-eye pattern.

Cromdo's hut is in the center of Snaxburg, neighbouring Gramble's ranch left side behind it, Snorpy's and Chandlo's mill on the right, Floofty and Triffany's tent on the front right and facing the town's campfire spot and Eggabell's and Lizbert's hut. As he is essentially a shop & barkeeper providing to the town he requires such a central location. He has a cart in front of his hut with wooden cups filled with Snakwater. 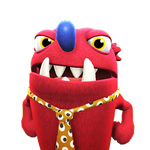 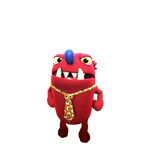 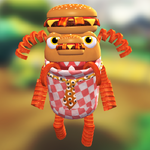