"I had to recall half a billion papers AND give a public apology, all because your 'Grumpfoot' turned out to be a lost football mascot!"

Clum Clumby Clumbernut is a high-ranking employee at GNN, and The Journalist's grouchy supervisor. In the true ending of the game, she is revealed to be a Snakolyte.

My editor. Used to love Mondays, now despises them.

Clumby is grouchy and skeptical, specifically of the existence of Bugsnax and the credibility of Elizabert Megafig. Tired of the Journalist's tendency to chase "monster hunts", she threatens to fire them, unless they can return alive with proof of Bugsnax. She is quite reliant on coffee.

At some point in the past, Clumby was, much like the player, a journalist investigating Snaktooth Island. In her expedition, she came across the Triplicate Space, where she met and interviewed Alegander Jamfoot. To prevent the information from this interview from becoming public, Clumby was recruited into the Snakolytes herself. She now uses her position at GNN to keep sensitive information from going public, feigning skepticism of Bugsnax.

Clumby is a short orange-furred Grumpus with a pink, oval-shaped nose and green eyes.
She wears white pointed glasses, a brown reporter's hat, and a lanyard that contains her ID card.
Her face shape is an overbite, the front row four big even round teeth and the row below three big round teeth, the middle one thinner than the two wider outer ones but all the same height.

Clumby bears a resemblance to Garfield [2] thanks to her orange fur, pink nose, and half-lidded eyes. Various other aspects of Clumby make this resemblance even more apparent. 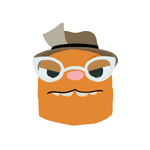 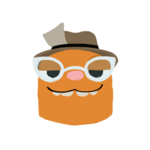 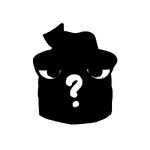 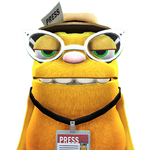 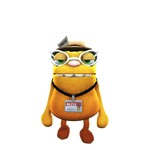