"I'm Chandlo Funkbun. With wisdom and liftin', I got the full package, you feel me?"

Chandlo Funkbun is a Grumpus who is a resident of Snaxburg, and part of Elizabert Megafig's expedition. The Journalist refers to him as 'The Beefcake' in Chandlo's interview description. He is in a relationship with Snorpy.

Chandlo prides himself in his strength, always trying to test his physical abilities. He is also fond of Shelda's "wisdom," though he often misinterprets it. He enjoys shooting hoops, but has a tendency to lose his basketballs in trees and high cliffs. He is good-natured and shown to be quite nurturing and protective of those he cares about, particularly Snorpy, and attempts to act as a peacekeeper at times.

Chandlo respects the bugsnax and believes that consuming them is the key to building his strength beyond what would normally be physically possible. He believes that strength is the key to protecting Snorpy, and this is what fuels his quest for ever more powerful Bugsnax.

Chandlo is implied to be a talented engineer, and was the one who constructed the buildings in Snaxburg with Snorpy's help.

Chandlo joined the expedition in search for the physical challenges the extreme and varied environmental conditions Snaktooth Island had to offer - the island being known for its earthquakes, avalanches, eruptions and ships going missing near its shores. (latter mentioned in Clumby's interview.) He "made" Snorpy tag along, insisting that the outdoors would be good for Snorpy's health, perhaps convinced that his strength would be sufficient to protect Snorpy from the island's infamous dangers.

Chandlo's issue is the assumption that Snorpy requires such protection, the issue for both of them being their lack of communication as partners, so much so that Snorpy is not even aware they are dating since kindergarten, having him still worry about exposing his feelings due to expecting rejection.

In Chandlo's interview he states that he is fond of Lizbert but has little to say about her as he is tighter with Eggabell, the latter he coaches in fitness and otherwise talks to knowing she is prone to depressive episodes. He also resents Floofty for their experiments on Eggabell, even if Eggabell went into it willingly.
Chandlo sharing what he knows and helping where he can reflects his relationship to Shelda, to whom he turns for wisdom. While "he does not pretend to understand", he still values her every word and is inspired by it no matter how he may interpret her lessons. This however is frustrating to Shelda because she tries to make him understand but is stuck on keeping her formulation mystical as to ensure people listen to her at all.

Chandlo's stance on Bugsnax is respect for their strength/durability but his opinion on consumption varies. In the Video Diaries he is concerned with Eggabell's intake, due to Floofty's experiments, speaking of her as having "hit the Bugsnax" quite a lot. This shows he has some worry of what Bugsnax do which means he may partially understood Shelda's warnings or applies his own interpretation of them as some kind of steroids. The latter remains confusing in the storytelling as it is stated various times that Bugsnax are their only foodsource aside Sauce.

Chandlo's issue of needing to be able to face any challenge physically has him consume Bugsnax in the assumption it will enhance his strength and/or lend the power of the consumed Bugsnax to him. He speaks desire to want to be able to climb like a Cinnasnail and fly like a Hunnabee. He thinks Beefy Bugsnax would make him beefier. With Mama Mewon he expected consuming the grand Legendary Bugsnak would lead him to grow in size. All such does not happen much to Chandlo's disappointment and any feeling of gain is short-lived.

Chandlo is an extremely buff short lime green-furred Grumpus with a small, burgundy, button nose and pink eyes. His muscular build focuses on his arms and chest - due to a lack of neck reference, his chest muscles could also be read as a cleft chin. He has developed abs underneath his shirt.
His face shape is an overbite with huge tusks, two sharp front teeth and a below row of three sharp teeth.
He wears his purple baseball cap backwards. On the front "SNAX" is embroided on it.
His defining accessory[1] is a white tank top with purple edging and a logo of the New Grump City basketball team. This could mean he plays for said team.

Chandlo and Snorpy share their residence in the mill of the town. A waterwheel is attached to the building possibly to power Snorpy's indoor forge. The town's stock of wood is kept here as well as other tool and materials for building. The team provides the whole architectural structure of town and a mill is an essential community aspect, though without function in the gameplay. The area behind Gramble's ranch functions as their yard where Chandlo has put his hoop and basketballs.

The mill has an entrance on both sides with a top floor where Chandlo and Snorpy have their beds. They sleep separated. 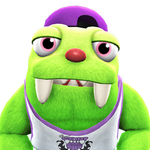 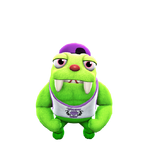 There and Back Again! 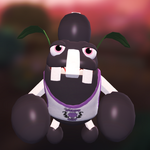 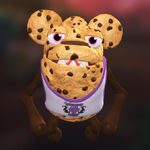 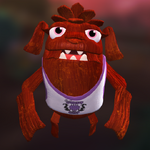 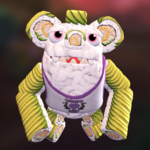