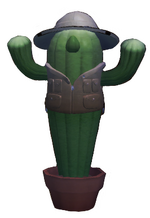 Cactriffy, also referred to as simply Cactus, is a Grumpus-sized cactus plant that greatly resembles Triffany Lottablog. It was dressed like her by Wambus Troubleham, longing for her companionship after Triffany left Snaxburg.

Late at night, between 10:00 PM and 1:00 AM, Wambus sometimes talks to Cactus Triffany, revealing his more sensitive side as he says how much he misses the real Triffany. The Journalist is required to eavesdrop on this exchange for the quest Dig That Dirt!.

When trying to convince Triffany to come back to Snaxburg, the Journalist can mention, among other things, that Wambus dressed a cactus to look like her. This convinces her to return, and once she does, Wambus mentions that he hopes the cactus "doesn't get jealous". Wambus remains loyal and loving to his support cactus wife.

Once Triffany is back in Snaxburg, the cactus can be found in many different places, seemingly having moved on its own. You must scan her to get a secret Mail Quest. She can appear in the tent where Triffany does research, the second floor of Lizbert's and Eggabell's hut, and next to Wambus's scarecrow at his farm. This is never commented on by any character.

During the side quest Inside Man! the Journalist imitates the cactus once Wambus wakes up, telling him he should go to bed. This could indicate Wambus can hear her speak. Meta-wise, the Journalist actually has no audible audio attached to them either.