Bugsnax was released digitally on November 12th, 2020 for PS4, PS5, and the Epic Games Store, with a physical edition from Fangamer becoming available sometime in 2021.

The theme song, "It's Bugsnax!" was written and performed by Kero Kero Bonito.

Bugsnax is played from a first-person perspective. The player controls an unnamed journalist who arrives on Snaktooth Island, and is tasked with finding the various other characters on the island, convincing them to return to Snaxburg, and interview them in order to discover what happened to Elizabert Megafig, organizer of the expedition.

In order to achieve this, the player must capture Bugsnax. This is done using a variety of devices, each with their own effects. Observing the behavior and personality of each Bugsnak is the key to determining what trap, combination of traps, or even other Bugsnak may be needed to capture it. Captured Bugsnax can be fed to other characters to customize their appearances. 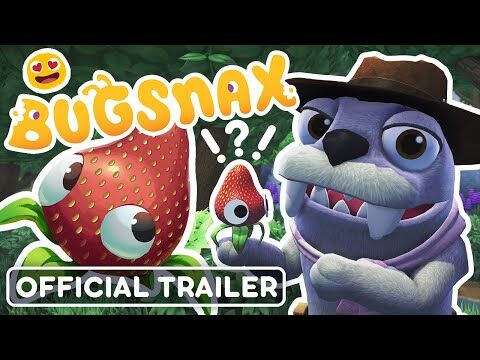