The Buggy Ball, also referred to as Strabball[1] and Stramble[2], is a Field Tool that can enter small spaces and functions as mobile lure.

The Journalist receives it from Gramble in Simmering Springs. It contains Sprout, a Strabby trained by Gramble in a glass ball (reminiscent of a hamster ball). Sprout is trained to follow a laser pointer.

The Buggy Ball has a variety of uses. It can be led into small, inaccessible tunnels, chasing out a Peelbug that may be hiding inside. The ball can be covered in any sauce, which can be used to lure Bugsnax over great distances at a low sauce cost. The Trip Shot can even be attached to the ball, allowing the tripwire to be actively moved around.

Something to keep in mind while using the Buggy Ball is that curious crab-like Bugsnax can pick it up and carry it away. While not difficult to retrieve, a Crapple may cause it to land in the water, washing off any sauce. A Noodler or Stewdler will set the ball on fire, though having a controllable fire source can be used to the player's advantage.

Sprout is the Strabby within the Buggy Ball. It seems to be a "baby" Strabby, since it is smaller than others seen, and still somewhat green toward the tip. Sprout is a favorite pet of Gramble, who not only keeps it safe within a ball, but constructs elaborate obstacle courses for it. Gramble entrusts the player with Sprout because he believes it longs for adventure, which he wouldn't be able to provide himself. 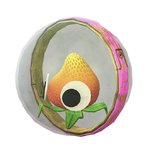 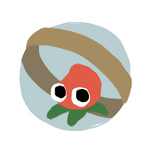