Jamfoot is theatrically hammy, speaking both in grandeur as but also laments a lack of control. They have a legitimate interest in the goals of the organization, and believes their own knowledge to be very beneficial to it. Jamfoot is stuck monitoring the Triplicate Space for years on end, and hopes for a better salary and employment benefits. They feels offended when their privacy is breached and seeks petty revenge.

Outside of their tapes, they show to be similar to Snorpy in mindset, writing down their thoughts and theories on scraps of paper. Notes pinned on the pinboard include Jamfoot reminding themself they are 'not being watched', to 'stay hydrated or else', that their birthday is coming up and where to find peanut butter. In combination with their displayed portrait of themself as employee of the month (and the break room space itself implying there are more employees present which there are not) it seems they struggle with their loneliness and are trying to retain sanity and health. In isolation, Jamfoot has formed an attachment to Cappucceetle, naming it Joey Quickbeans and considering it their best friend, making them similar to Gramble.[2]

Jamfoot has not been given a model and the closest to their appearance is their "Employee of the Month" award wall display. It seems as though this design has been made in picrew[3] judging by the "asset" reuse whereas all other Grumpuses have carefully constructed designs that explore the boundaries of their diversity. Their underbite is borrowed from Cromdo, their nose from Triffany and their hat from Clumby.

Unique features are their scruffy dark gray fur colour (The Journalist fur option is black), their red framed sunglasses that have been mostly smashed - the frame on their left is partially shattered, while the right frame is completely missing - and a black woolen top (which is partially obscured by a dormant Cappucceetle). 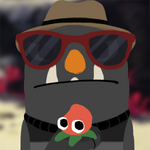 The unused "grumpphoto" file found in the gamefiles seemingly depicts a younger Alegander in their picrew glory. Their glasses are not yet broken, their fur not unkempt and their expression is more determined and less "lost". They are holding up a Strabby.

In both the letter and in Cappucceetle's SnaxScope text, their icon appears as a silhouette of a Grumpus lacking unique features with a white question mark on top - even if the Journalist has already been informed of their name.

Cappucceetle: I've named him Joey Quickbeans. He is my best friend. I have been here for a very long time.